Earlier this week, illustrator Holly Maslen (the painter of our AMAZING Pop Up wall) was kind enough to come down to 54 Sloane Square and conduct the most brilliant illustration workshop so, seeing as the shop isn't big enough to hold everybody who wanted to come, we thought we'd ask Holly to write about it too! So without further ado... 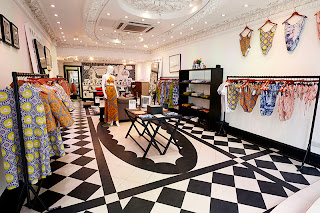 'On Monday evening I headed over to Charlotte Taylor's pop up shop on Sloane Square to host an interactive illustration workshop.  This event was a follow up based around the wall I painted in the shop a couple of weeks earlier.I was absolutely delighted when I received an email from Charlotte inviting me to design a mural for the wall using key features taken from her current collection and interpreting them in my own style.  The wall took four days to paint and was ready just in time for the press launch which was held on Tuesday 7th of May. 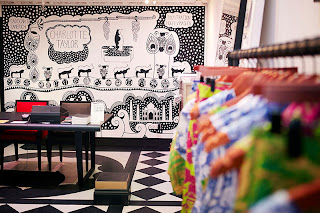 Holly's wall in the CT Pop Up
I met Charlotte about five years ago through mutual friends on the Isle of Wight and I've followed her progress as she's steadily gained more and more recognition for her work in the fashion industry and, knowing her on a personal level, I was pleased to be given the opportunity to work with her professionally too.

I work exclusively in black and white because I'm interested in focusing on finding a balance between spaces occupied by ink as much as looking at the blank spaces which are created in-between the main design.  I love to draw mountains and scenes which have a Scandinavian feel to them. 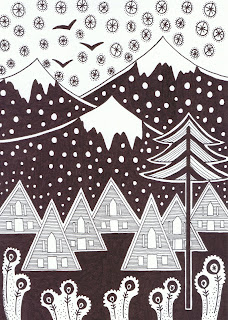 I am also interested in learning more about Japanese aesthetics and have incorporated a particular Japanese practise into my latest book, Miyoko.  However, despite the Scandinavian and Japanese influences I seem to spend a lot of time drawing animals having completed a body of work for the Isle of Wight Zoo, and now the wall design for Charlotte which incorporates several of her animal prints. 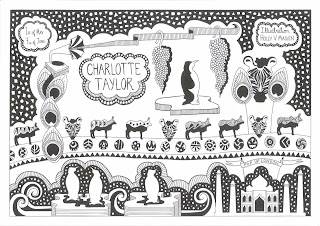 Holly's amazing invite to the CT Pop Up Shop

On Monday evening Charlotte and I thought that a brief talk about her collection and my work and influences would be a good place to start, followed by some warming up exercises to get the creative juices flowing.

I suggested that the group (there were 12 of us) should start by each drawing a random squiggle on a sheet of paper and passing it to the person on our right, the squiggle was then added to before being passed again. 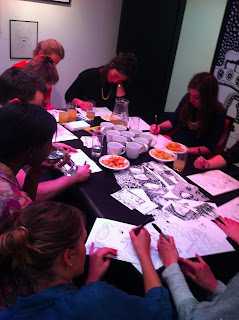 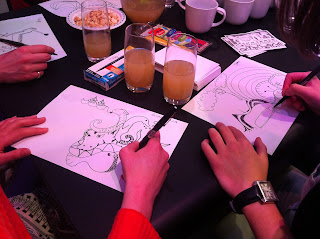 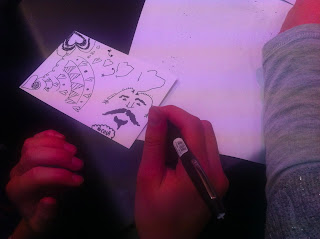 We continued to do this until our original doodle arrived back in front of us, having been added to by 11 others.... it was pretty interesting, and quite funny, to see what came out of this exercise. 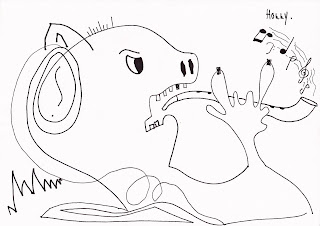 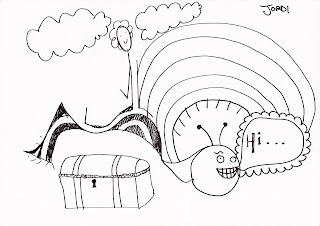 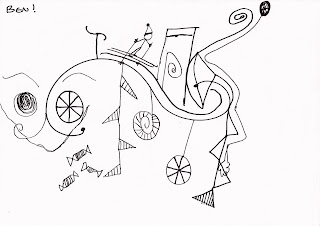 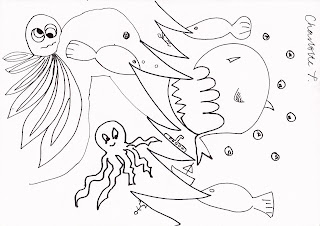 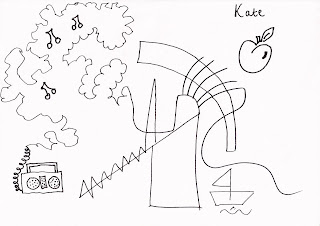 We repeated this exercise once more before moving on to creating our "Inspirational List".  I asked every one present to write down a word which we could then use as a group to illustrate.  Most of us used every word in our illustration, although some were quite abstract and challenging, such as "kaboom", "love" and "Spain" whilst others were just plain difficult, like "hippo".  One only realises that one has no real idea what a hippo looks like until confronted with the prospect of bringing one to life on paper! 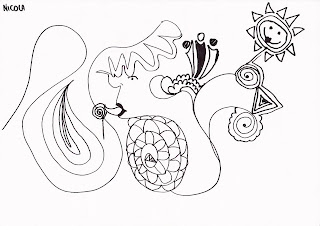 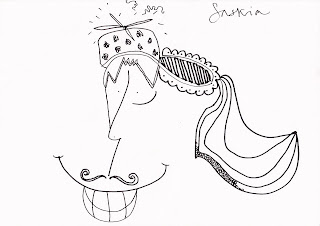 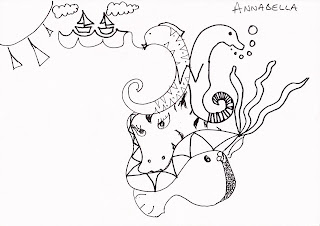 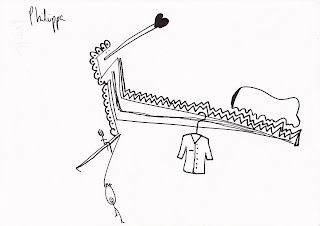 Once we were all suitably limbered up creatively we set to work on decorating mugs and I loved the fact that every time I looked up there was nothing but total concentration on everyone's faces.  At the end of the session one participant exclaimed that she felt like she'd just finished a yoga class, we all got into the meditative creative zone together which was fantastic!

The finished article!I really enjoyed my two stints at 54 Sloane Square, it was an absolute joy to work with Charlotte and Ben Taylor because they are creative, professional and great company, which is a rare mix!  I'm rather sad to be back on the Isle of Wight having had such a good time, but I'm busy preparing for my next visit to London when I'll be launching my illustrated book "Escargot Masquerade and Other Stories" which is being published by Freudian Scripts.

I will be holding an exhibition of drawings relating to the book at Freud, on Shaftesbury Avenue, from the 2nd of July until the 28th....perhaps I'll see some of you there!'

If you want to see more of Holly's work visit her website hollyvmaslen.com

We've got more events coming up in the CT Pop Up shop so keep your eyes on our Twitter and Facebook pages for details.
Posted by Charlotte Taylor at 17:12