My holiday at London Fashion Week

In comparison to the chaos that led up to LFW week, the whole presentation of the collection for four days was unexpectedly calm. No more sewing, spreadsheets, invites, printing, stuffing envelopes etc just plain old chatting, eating cake and drinking tea. Lovely. 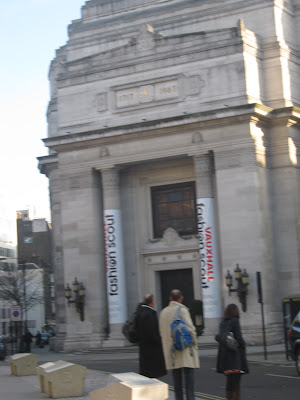 I rocked up at the Freemasons' Hall on Friday for set up. Having left the Island at 6am to meet the printers down the road and get my button holes done by Mr buttonhole (D.M. Buttons just off Berwick street) before set up at 4pm.

I of course was early for everything, turning up at the Freemasons' around the time of David Komas' show. His glamorous entourage gliding past my disheveled self, laden with half my collection (covered with bin bags) on one arm and a giant ironing board on the other. It took me a while to persuade the door staff that I actually was a designer and not a homeless person looking for a bed for the night. 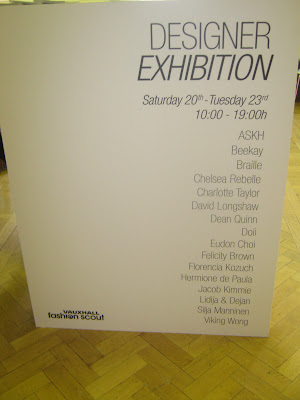 The space looked lovely and I managed to get my stuff set up before most other designers arrived. I had about 5 times as much stuff too. It was like trying to pack for my holidays and I hadn't been vigilant...at all.

The full set of china tea cups, saucers and teapot and 100 penguin cakes were of course a necessity. Five different types of tape might have been a bit much and a full styling kit for the workforce (me plus one) could probably have stayed at home too...never mind. 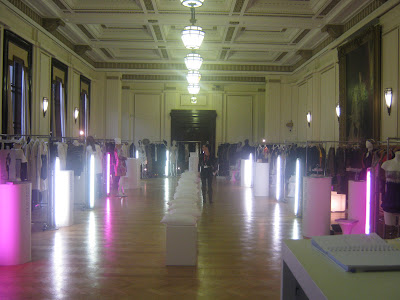 Can you tell me how many other designers served tea and Penguin cakes at their exhibitions though....eh? 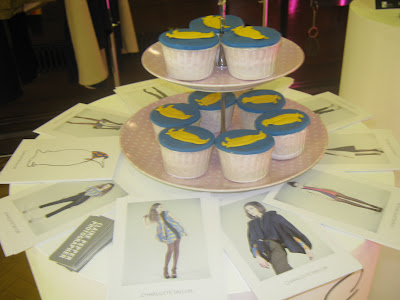 Also I might add, great branding. The cakes in turn transformed the tongues of the cake victims blue, so as a bystander would recognize a Stella McCartney guest by their goody bag, a CHARLOTTE TAYLOR guest was distinguishable by the colour of their tongue...genius. 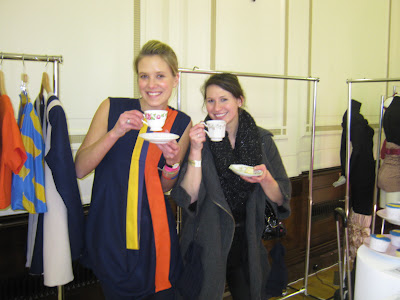 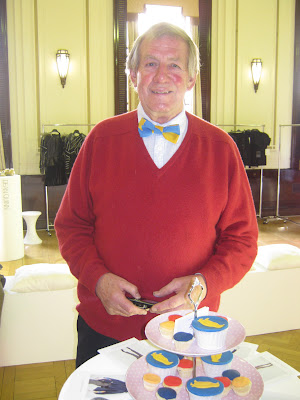 When dad arrived with mum and a very hungover disruptive brother in tow I donned him with my specially made penguin bow-tie and stood back to admire.

Within two minutes of arriving dad was chatting up all the pretty girls including my designer next door neighbor, who apparently already knew who he was because she had read my blog and much to dad's despair I reference his antics on a regular basis..this new found fame clearly canceled it out and dad was grinning as he circled the room chatting to everyone (as he always does) as if they were his long lost friend.

My bro demanded tea putting the wet cup down on my new lookbook (good one) and ate too many cakes and leaving a hefty amount of crummage around my area.

Mum was angelic as always and still recovering from being ill just hugged me lots. 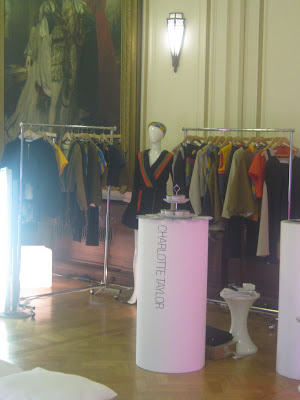 On the whole, the exhibition went really well and I have had some great positive feedback so far.

Fingers crossed for the next steps.
Posted by Charlotte Taylor at 21:46