An average Monday in the fair Isle

So I start the day off badly. Rushing out of my room, dog at my heels hyperventilating with excitement as we're going for our early morning 'walkies' I take the wooden stairs down to the main landing with unprecedented speed. Error. As my sock clad feet were taken from under me I thought mid-air, "Damn it. How can I sew with broken arms and legs?". Fortunately the hypochondriac in me was out in full force and although the landing was unpleasant, hitting head, shoulders and buttocks simultaneously I survived. Phew. Only to be greeted at the stair base by an even more excited dog, who thinking we were now playing a game took full advantage of my situation (tangled in a heap on the floor) and planted a huge sloppy lick bang on the lips...ergh. Typical man.

Anyway. Our walk was chaos free (apart from me walking like John Wayne - same thing must have happened when I was a bab; I look like i'm about to draw my pistols from their holsters in this photo) and we made it back in one piece just in time to collect my parents from the ferry. 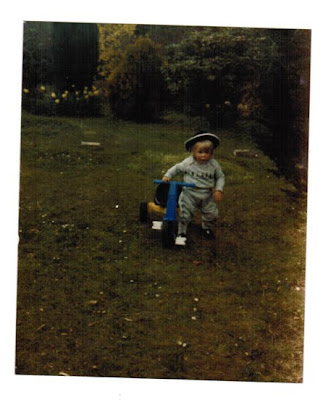 They were arriving back form their annual South Africa trip and their respective tans would have forced me to turn around and walk away if I wasn't so god damn happy to see them... 3 weeks on your own with only the dog to talk to is a long time...it's time to start rebuilding the 'normal' genes.

Mum: "Don't forget darling that we are all going to yoga at the sailing club tonight, 6pm start so make sure you're ready"
eh..??!??!

Money could not buy this. Picture the scene:
Bembridge Sailing club (the epitome of high class society on the Island). 7 OAP's and me.
- Mum = The human equivalent of Elastigirl from the Incredibles. She organized the evening and provides an exemplary standard of flexibility and poise at all times. Git. She turns up with perfectly rolled yoga mat in tow and matching ensemble.
- Dad = 73 yrs old. 6ft3. Overweight. Stiff as a board. Gardening tracksuit bottoms and Tescos' tee. Towel instead of Yoga mat. He proceeds to grunt and groan for the duration, losing balance or crying out in pain on a regular basis.
- Their mates - arriving with a mixture of picnic rugs, festival mats and jumpers. One actually had an 80's shell suit on. Amazing. 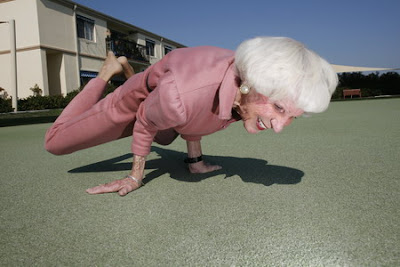 We start with breathing exercises and it's clear from the off-set that one of the participants is not happy. She stands in protest as she says she's here for the Yoga not the 'Mumbo Jumbo nonsense'. She doesn't want to do the nodding (neck stretching), or pretty much anything else....mum called it distracting. I called it rude.

In between the shell-suits, picnic rugs, "for god's sakes'", grunts, groans and collapses on the floor the Taylor family found the evening a huge success. Mum showed us all again how unbelievable she is for her age, virtually doing the splits. Dad gave his joints a well needed oil and I managed to take an hour away form the sewing machine and really relax. So important and so worth it.
Posted by Charlotte Taylor at 11:10